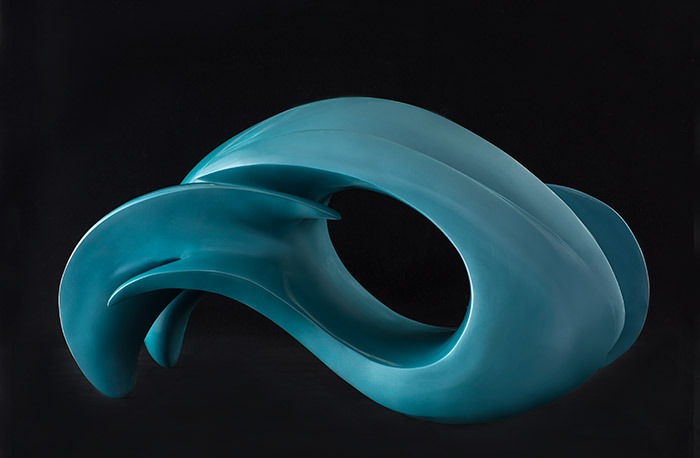 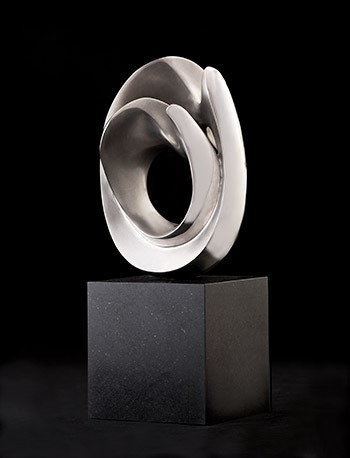 Ever since the tsunami that ravaged Banda Ache in 2004, Kavanagh has been obsessed with the paradox of water as sustainer of life and agent of destruction.  This led her to carve abstract interpretations of tsunami waves, ice moulins and even the threat posed by ocean acidification on pteropods, microscopic organisms at the bottom of the marine food web.

Her latest water-themed sculptures are simply called WAVE FORMS.  They were exhibited during Art Basel Miami, December 3-6, 2015, at Jalan jalan in the Design District.  Kavanagh’s WAVE FORMS are based on the roiling circularity of waves and the contradictions inherent in the beauty that can be found in the energy of storm-tossed seas.  In carving this work, her intention was not to depict what agitated water looks like.  Rather, it was to convey her emotional response to an element that soothes, nourishes and occasionally terrifies.

The small stainless steel sculptures are the essential shapes she imagines when out on the ocean on a small boat in heavy weather.  The large painted bronzes are Kavanagh’s interpretations of the crashing energy of ocean surf.  Both reflect an abiding love of the sea tempered by fear.