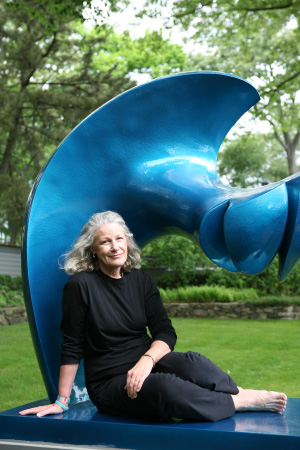 Cornelia Kubler Kavanagh is a daughter of noted art historian, George Kubler.  Not surprisingly, she was nurtured in an environment rich in the visual arts. A self-taught artist, Kavanagh’s artistic consciousness was nurtured by extensive travels abroad and studies in South America and Europe.  Although she had imagined becoming an artist after college, she taught history while raising her family, before giving in to her life-long passion for translating form into sculpture. For the past 35 years she has worked exclusively as a sculptor.  Teaching herself to carve stone in the Modernist tradition of Moore, Hepworth and Arp, Kavanagh gradually developed a style of her own characterized by rounded, sensual shapes.  As demand for her sculpture increased, Kavanagh turned to carving polystyrene, then finishing her maquettes in plaster or polymer for casting in bronze and aluminum.

Although Kavanagh’s subject matter is diverse, she is continually drawn to nature for inspiration, and has mounted several exhibitions that address environmental concerns.  These include tsunami waves, “Sea Butterflies” as surrogates for ocean acidification, and ice moulins as markers of global warming.  Her most recent museum show, at The Yale Peabody Museum, celebrated the goddess figures of the Upper Paleolithic, the world’s first three-dimensional representations of the female form.

In 2005, Kavanagh represented the United States Virgin Islands Council on the Arts in the 51st Venice Biennale with five Shape of Time sculptures that honored her father’s seminal treatise, The Shape of Time (Yale University Press, 1961). From 2013 to 2016, Kavanagh collaborated with Woods Hole Oceanographic Institution at the Smithsonian’s National Museum of Natural History on an exhibition titled FRAGILE BEAUTY: The Art & Science of Sea Butterflies.  In addition to the foregoing, Kavanagh has participated in three OPEN exhibitions in Venice-Lido, Miami’s design district during Art Basel Miami Beach, New York’s American Museum of Natural History, the Peabody Essex Museum in Salem, MA, SOFA, Chicago, IL, and numerous regional museums and galleries throughout the country.  Important installations include the Smilow Cancer Hospital at Yale-New Haven, the Dwight School in Englewood, NJ and the Lancaster Winery in Healdsburg, CA.