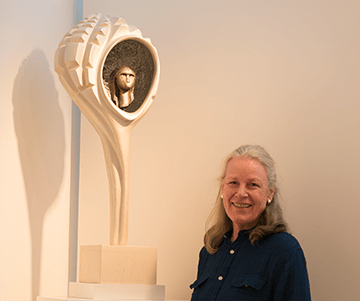 Her intent is to portray the essence of natural forms.

Cornelia Kubler Kavanagh is a daughter of noted art historian, George Kubler.  Not surprisingly, she was nurtured in an environment rich in the visual arts, extensive travels abroad and schooling in Europe and Latin America.  Although she had imagined working as an artist after college, she taught history while raising her family, before beginning to realize her life-long passion to become a sculptor.

Teaching herself to carve stone in the Modernist tradition of Arp, Hepworth and Moore, Kavanagh gradually developed a style of her own characterized by rounded, biomorphic shapes.  As demand for her work increased, she began inventing ways to carve polystyrene, and to finish maquettes with plaster or aqua resin for casting in bronze and aluminum.

In 2005 Kavanagh represented the United States Virgin Islands Council on the Arts at the 51st Venice Biennale with several sculptures honoring her father’s seminal treatise on art history, THE SHAPE OF TIME.  Her “Shape of Time” sculptures addressed such diverse subjects as Chacmool, the Toltec-Maya recumbent rain god that inspired Henry Moore, and Aevum, a notion attributed to St. Thomas Aquinas that Kubler described as “the duration of human souls, intermittent between time and eternity, having a beginning but no end.” Castings of Aevum are located in the lobby of the Smilow Cancer Hospital at Yale-New Haven and in the new University Hospital of Princeton in Plainsboro, New Jersey.

While working on a series of muse sculptures, Kavanagh was so distressed by the devastation of the Banda Aceh Tsunami of 2004 that she directed her attention to attempting to reconcile the paradox of water as life force and agent of destruction. She carved a series of tsunami waves that was first exhibited at the Blue Mountain Gallery in New York in 2006.  This exhibit marked a turning point in her career as she had, by then, determined to focus on environmental issues in hopes her work might help raise consciousness about the health of our oceans.

Writing in the December, 2006 issue of SCULPTURE, William Zimmer noted that while a “tsunami is universally feared as a bringer of mass destruction, if it could be arrested, it would have an awesomely beautiful shape.  Kavanagh has created a dozen different sculptures that reiterate the essential sublimity of the giant waves…The exalting of something awful is a seeming contradiction that might be difficult to assimilate, but it’s the kind of singular tension embraced by the highest art.”

Celebrating the ‘awful’ may seem anachronistic, but it fuels emotional responses in Kavanagh’s deep well of environmental concerns.  Worry about the melting of the Polar cap encouraged her to consult with glaciologists about ice moulins, or tubular chutes through which glacial melt water cascades into the sea. “ARCTIC ICE MELT: moulins of my mind,” her exhibit that highlighted this problem, was previewed during the International Polar Weekend at New York’s American Museum of Natural History in February, 2009, and then exhibited at Blue Mountain Gallery in September of that year. In 2010, two of Kavanagh’s Moulin sculptures were installed at the Peabody Essex Museum in Salem, MA, in a year-long exhibit called “RIPPLE EFFECT: The Art of H20.”

While working on the Moulin sculptures, Kavanagh began wondering how countless millions of gallons of onrushing melt water was affecting marine life at the edges of calving glaciers.  Eventually, her inquiries led to the discovery of a beautiful microscopic marine animal called a pteropod (also known as a sea butterfly).  No larger than a grain of sand, pteropods are potentially subject to harm from rising levels of ocean acidification caused by CO2 emissions.  Delighted that pteropods evoked images of Arp, Miro and Kandinsky, Kavanagh felt she had discovered an ideal surrogate for the health of our oceans, and she began to carve abstract interpretations of these beautiful tiny creatures, some enlarged up to four hundred times.

Questioning whether her maquettes were sufficiently representational as to be recognizable, Kavanagh met with Dr. Gareth Lawson of the Woods Hole Oceanographic Institution (WHOI).  Thinking a fine art exhibition would be a compelling form of outreach, WHOI decided to collaborate.  In May of 2012, “THE PTEROPOD PROJECT: charismatic microfauna” was shown at Bule Mountain Gallery in New York.

In a book about “THE PTEROPOD PROJECT” by art historian Stephanie Grilli, she notes that Kavanagh “takes the minimal components of the pteropod and sets them in off-balanced arrangements.  This torsion away from the central axis lends a visceral feeling of motion in the viewer.  In suspended animation, the figures could be protean spirits of the deep, winged messengers from the ocean world…Reaching back into history, Kavanagh elevates the microscopic pteropod through her fluency with the world’s sculptural traditions.”

A compressed version of the show, with five pteropod sculptures and WHOI graphics, was subsequently installed in the Sant Ocean Hall of the Smithsonian’s National Museum of Natural History in Washington, DC.  Titled “”FRAGILE BEAUTY: The Art & Science of Sea Butterflies,” the exhibition was intended to be ‘temporary’ but ended up remaining on display for almost three years.  During this period, two other pteropod sculptures were included in an exhibition at the Peabody-Essex Museum in Salem, MA called “Sizing It Up: Scale in Nature and Art.”

As Kavanagh’s decade-long exploration of water and its inherent contradictions between beauty and devastation continued to evolve, she carved a series of “WAVE FORM” sculptures that were exhibited in the Design District during the 2014 Art Basel fair in Miami Beach.  These sculptures, cast in bronze and stainless steel, convey Kavanagh’s emotional response to an element that “soothes, nourishes and occasionally terrifies.”

Although her abiding sensitivity to natural shapes and her passion for portraying the essence of living forms will likely always find expression in her work, she recently completed a “celebration” of the so-called “Venus” figures, the first known three-dimensional representations of the female form, carved during the Late Stone Age by Cro-Magnon hunters and gathers between 40,000-10,000 BCE.

Exhibited during June 2016 at the National Association of Women Artists’ Gallery in New York, Kavanagh’s “Ice Age Goddess” installation featured 12 scaled-up replications in bronze and polymer of some of the most well known “Venus” figures that have been unearthed (e.g. the “Venus” of Willendorf, and the ‘Venus” of Lespugue).  Situating them in fantasy sea shells that project both symbolic and art historical connections to the female form, Kavanagh, according to Grilli, “brings to a point of convergence the natural object perceived as art and the human-made object as natural form in a way that is almost symbiotic.”

In a recent interview with Kavanagh, ARTES magazine editor Richard Friswell noted that “turning abstract concepts into tangible realities is central to the work of a sculptor,” and the common tread in Kavanagh’s work is “a desire to access deeply-embedded emotions in the sheer beauty of manipulated forms.  Kavanagh’s goal: To have her sculpture connect with the world of our experience in a manner that is both pleasing and instructive.”