From the air, Greenland’s vast ice cap appears perfectly calm.  Below the surface, however, things are not as they once were.  Sadly, the Arctic is warming twice as fast as any place on earth. Pieces of glaciers tumble into the sea while tons of surface melt water disappear down holes in the ice called moulins. French for windmill, a moulin is a tubular chute worn in glacial ice by melting surface water. Water flowing into moulins carves circular patterns as it cascades through the ice, lubricating the underside of glaciers and causing them to slide into the sea.

I am an artist, not a scientist.  Something ineffable drew me to the idea of moulins long before I understood their significance. Quite serendipitously, I discovered the work of Dr. Stephanie Pfirman, a noted glaciologist. She graciously introduced me to Dr. Konrad Steffen, the world’ s foremost moulinologist.  In the summer of 2009, Dr. Steffen lowered a rotation laser digital camera 1,500 feet into a moulin 300 miles north of the Arctic circle in order to measure the volume of melt water rushing through it.

ARCTIC ICE MELT: Moulins of My Mind is my emotional response to Dr. Steffen’s pioneering photography.  By the suggestion of abraded surfaces and turgid swirls, I tried to convey the ominous message that global warming portends for a vital world of ice that is increasingly threatened.

Three of my moulin sculptures were previewed at the American Museum of Natural History in New York during the Polar Weekend, a special exhibition on global warming featuring a number of artists who had worked with scientists studying glaciers, February 7-8, 2009.   ARCTIC ICE MELT: Moulins of My Mind was a solo exhibition of 11 sculptures at New York’s Blue Mountain Gallery, September 8 – October 3, 2009.  From there, two of my moulin sculptures were selected for an exhibition at the Peabody-Essex Museum in Salem, MA for an exhibition called RIPPLE EFFECT: The Art of Water, June 18, 2011 through May, 2012.  What follows is a selection of installation photos at these three venues. 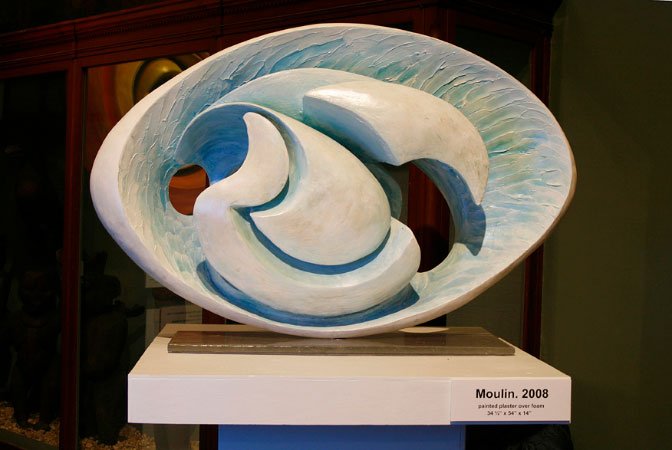 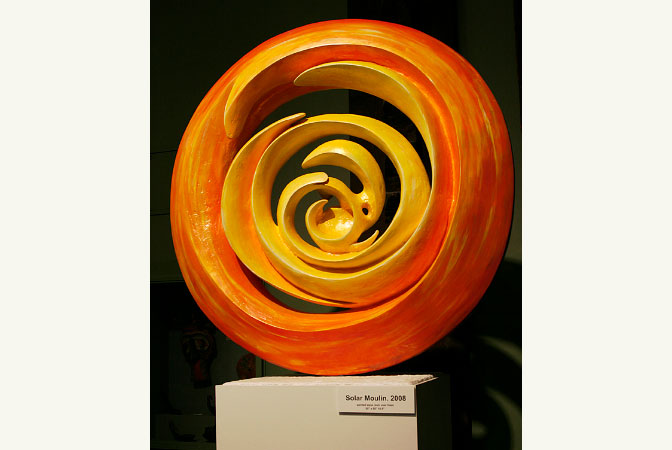 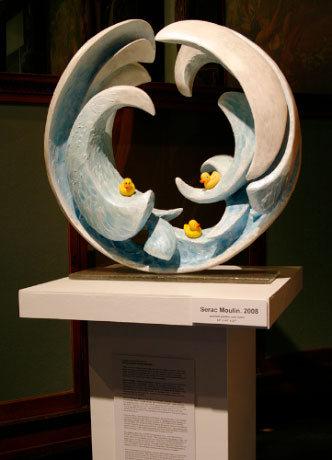 The two ice moulin sculptures I exhibited at the Polar Weekend evoke the abraded, curved patterns melt water creates coursing through glacial ice.   They are carved from blocks of foam, coated with plaster and refined with compound before painting with colored glaze.

The rubber ducks placed in Serac Moulin recall a light-hearted attempt Dr. Steffen made to see how long it would take a rubber duck to emerge from a moulin into the sea   Not one of the dozens of rubber ducks he set on this journey were ever found.  Then again, Dr. Steffen was working at Swiss Camp, 300 miles north of the arctic circle where glacial ice is over two miles thick!

Solar Moulin, my abstraction of the Arctic sun, was included to underscore that the Arctic is warming twice as fast as any place on earth.  Given that the sun is a swirling mass of superheated gas, and ice moulins are created by swirling cascades of icy water, I rendered the sun in moulin form to evoke the synergy between these elemental forces.   The show also included a panel on which Robert Frost’s apocryphal poem “Fire and Ice” was reproduced. 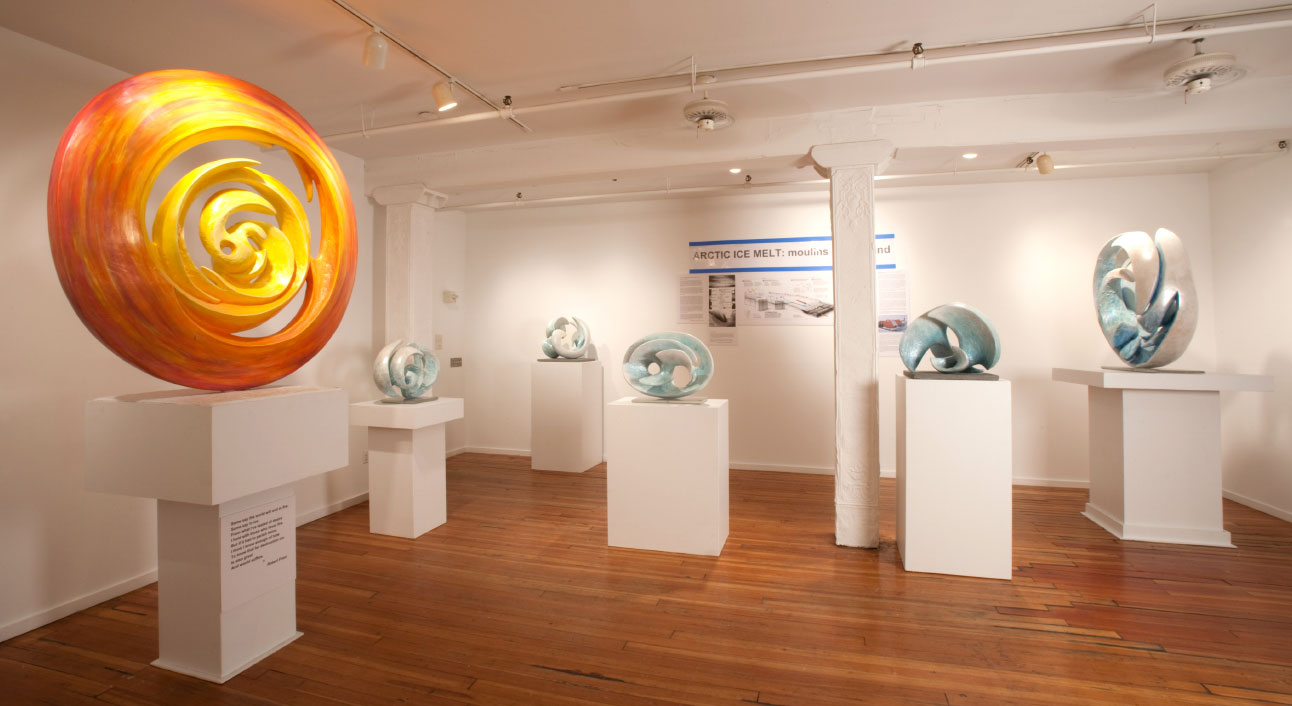 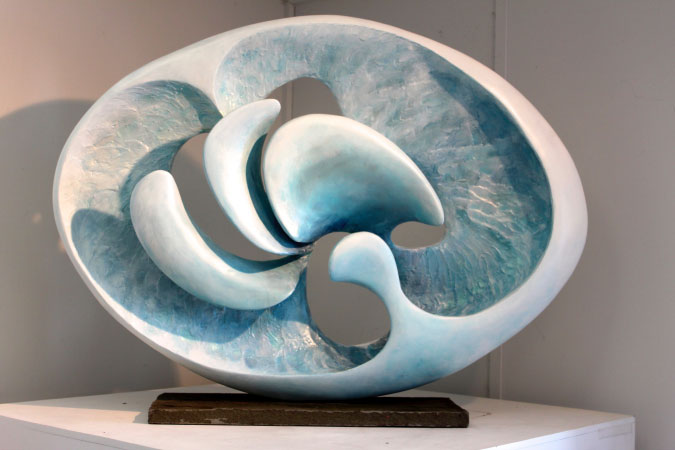 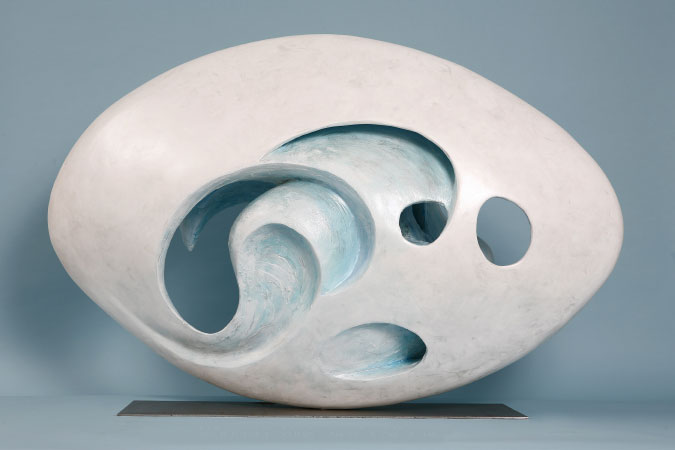 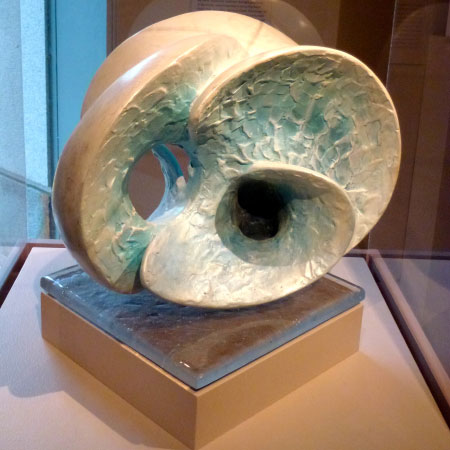 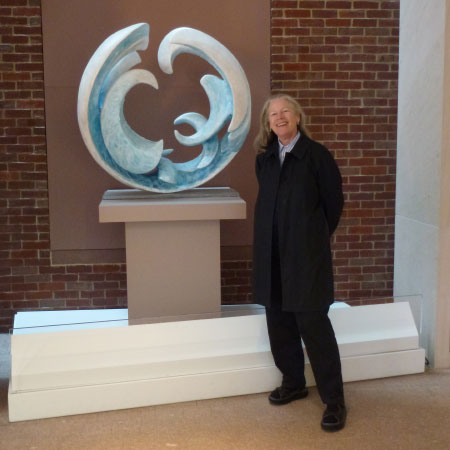