I have long been intrigued by the hieroglyphic symbols of ancient cultures, particularly those of the Old European societies that thrived between the Danube river valley and the Mediterranean, Adriatic and Aegean seas during the Neolithic period.

The Neolithic peoples who carved these hieroglyphs were agricultural, peaceful and Goddess-worshipping. According to archaeologists, their societies and surroundings were bequests of a Mother-Goddess who governed all aspects of their lives and the environments in which they lived.

As a modernist sculptor, what I find most appealing is how “modern” these hieroglyphs appear, having been carved between 7,000 and 3,500 BCE. These simple shapes convey messages that evoke strong emotional responses to the rhythms of life.

In this exhibition I focused on a selection of Goddess images that involve the circle, the triangle, the egg, the river, the snake, the owl, the butterfly, the earth and the sky.  All are parts of a whole ideological system that thrived and survived well into the early Christian era.

While I have taken artistic license in interpreting, I feel these hieroglyphs would be recognizable by those who carved them. For information, I have relied on Marija Gimbutas, one of the foremost authorities of Old European Goddess cultures, who wrote: “through myth, images and symbols, man comprehended and manifested his being.”

The sculptures below were carved in 2019 from Brazilian steatite. They are 18 ½” in diameter x 3” thick, and are mounted on Absolute Black granite bases. 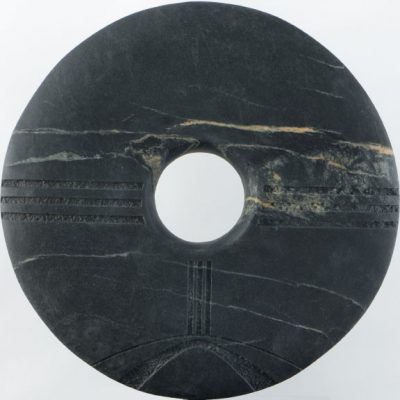 Parallel lines above the curved earth represent sacred streams , purity, life and freedom. They also represent what Gimbutas described as the “fluid expanse of mystery.” 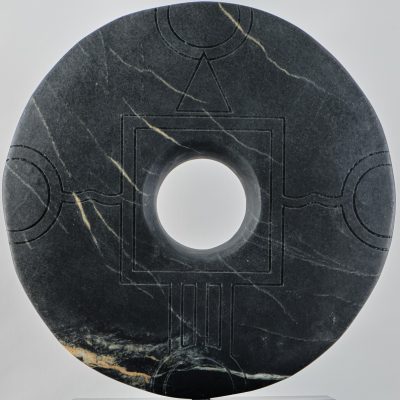 This mandala evokes the lunar cycle and regenerative role of the Goddess in the cycles of birth, death and rebirth. 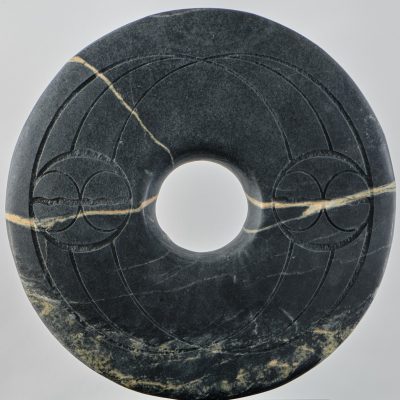 Snakes winding across double eggs symbolize nuclear life force and coming into being within a swirling cosmos. 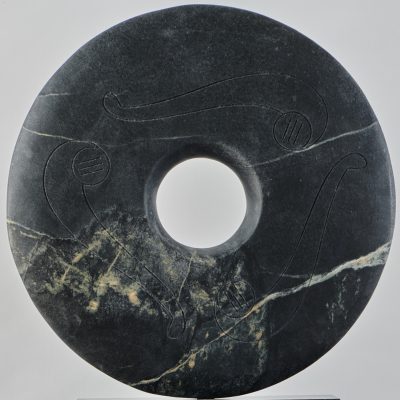 These snake-like figures represent the Old European notion of the life force of the Goddess. The triple lines represent water. 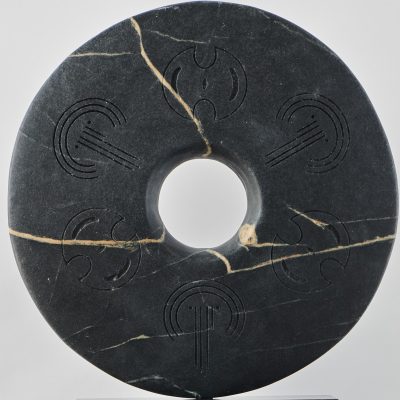 The owl, as prophetic bird and messenger of death, contrasts with the butterfly, a symbol of self-renewal and transformation. 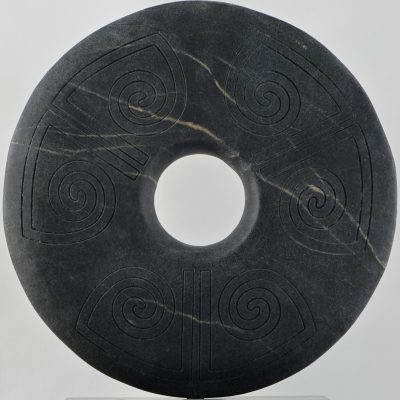 Running spirals flourished in Old Europe during the 5th millennium BCE, perhaps symbolizing the archetypal path of growth and evolution.